Propaganda posters often urged men to enlist in the British Army by appealing to ideas of masculinity, heroism, pride and loyalty.  These widely circulated posters relied on a viewers positive response to imagery of healthy, stalwart soldiers or emblems of the British nation.

In contrast, many war artists offered a harsh but realistic visual depiction of the death and destruction that resulted from combat.  For example, although C.R.W. Nevison’s stark painting, Paths of Glory, has an idealistic title we are made to shudder at the sight of two dead soldiers lying in the battlefield of mud.  We cannot identify with, or even identify these soldiers at all.  Their faces are obscured and their bodies merge with the muddy earth, suggesting the loss of identity and the waste of young lives.  The brownish grey mud almost threatens to rise up and swallow the entire scene.

Paul Nashs’s 1917 work, The Menin Road, depicts a ruined Belgian landscape.  Dead tree trunks rise in a wasteland if mud and standing water.  This spooky, alienating place, includes strange clouds of smoke penetrated here and there by searchlights.  Despite these beams of light, we cannot see anything past the immediate scene.  Here in Chaos, irreversible change, and devastation.

During the years leading up to the war, many modernists began to turn their attention to their media; writers and authors broke free of traditional constraints of form and imagery and brought the very materials of their crafts to the forefront.  They questioned the solidarity of the bond between representation and meaning.  Works such as T. S Elliot’s poem “The Waste Land”, Mark Gertler’s “Merry Go Round” or Virginia Wolfe’s “Mrs Dalloway” sort to shock, alienate, or provoke audiences and therby explore new sensory and intellectual effects in art and literature. 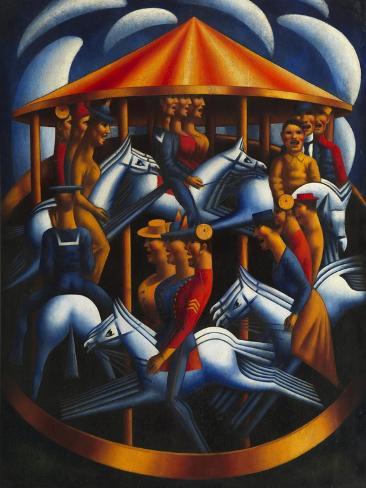 While the modernist movement had begun prior to the war, the conflict’s vast scale, brutality, and cost fascinated many artists and writers.  The war definitely ended many social and cultural traditions that survived the nineteenth century and made clear the modern, mechanized world we were entering, a world where the older expressive forms and techniques no longer seemed adequate, appropriate, or compelling.